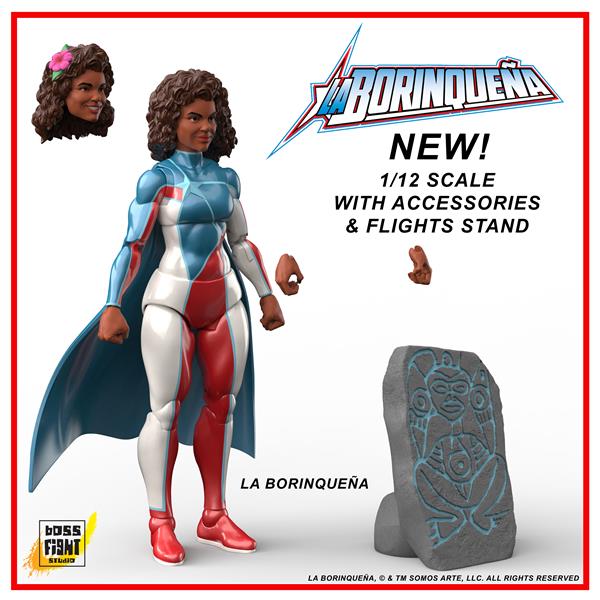 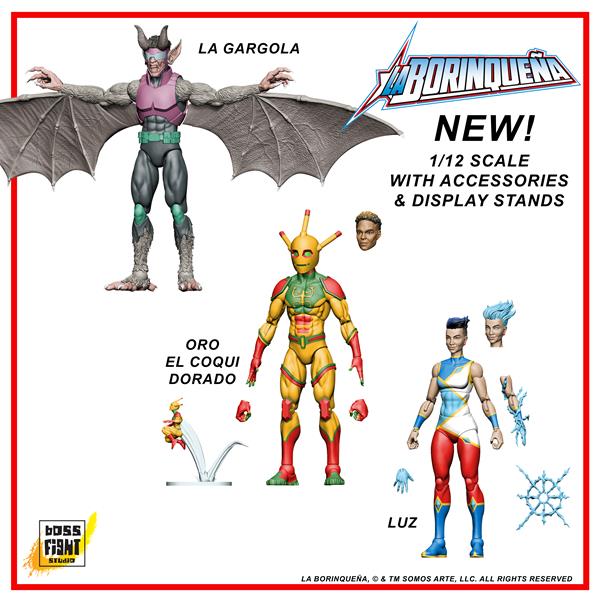 Boss Fight Studio is known for their highly articulated action figures, as well as for bringing diversity into the action figure space. “From the moment we read the La Borinqueña comic books, we were taken by the female power, the diversity, and the wonderful storytelling – it seemed like such a natural fit for us. Being able to translate these super powerful characters into articulated figures is a dream,” says Erik Arana, Partner and Art Director at Boss Fight Studio.

“La Borinqueña and my other characters are celebrated by fans internationally for our stories, activism, and philanthropy that, I wanted to find a partner that would help bring them to life in incredibly designed action figures,” says Edgardo Miranda-Rodriguez, creator of La Borinqueña. “Boss Fight Studio was the ideal partner with their innovative approach to articulated figures. The designs look like they jumped off the page of our comics and came to life. Collectors and children will rejoice in creating their own adventures with this new line whether they’re in Puerto Rico or Brooklyn, NY!”

Kicking off with 1:12 scale figures, the characters initially announced include La Borinqueña, Luz, Oro El Coqui Dorado, and La Gargola. Images for the figures were released today as well. “We have so many plans for this license – the characters are naturally toyetic and we can’t wait to show them off!” says Arana.

About Boss Fight Studio
Boss Fight Studio (BFS) is a creator-owned company focused on high-quality, collectible toys. BFS products are known for having multiple articulation points, which allow for innovative and creative poses. The H.A.C.K.S. line is also fully customizable, which empowers collectors to build their own characters using pieces from the range. For more information reach out to BFS at press@bossfightstudio.com or visit bossfightstudio.com.

About La Borinqueña
​​La Borinqueña is the original superhero character created and published by award-winning philanthropist and graphic novelist Edgardo Miranda-Rodriguez. It is the only graphic novel series dedicated to philanthropic work in Puerto Rico and part of the permanent collection of the Smithsonian Museum.