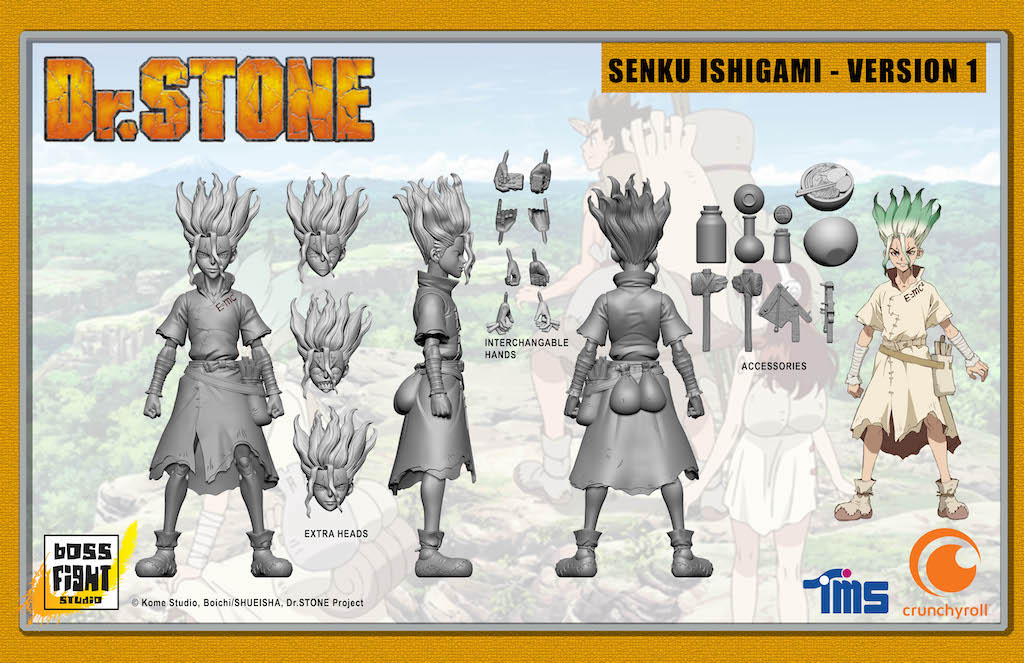 The first anime figures to come to market from Boss Fight Studio, these figures represent a shift into yet another genre alongside pop culture favorites, contemporary favorites, and beloved iconic brands. Known for products that emphasize playability, Boss Fight Studio is excited to tackle the Dr. STONE brand in articulated figures: “Dr. STONE’s visual references are brilliant and turning them into articulated action figures has been a dream,” says Catrina Arana, Partner and Creative Art Director at Boss Fight Studio.

“We’re thrilled to see these fan favorite characters come to life in a fully poseable way,” said Alexander Lee, Director of Consumer Products Crunchyroll. “Boss Fight is the perfect partner to take these from animation to highly articulated figures.”

“This is a show I have followed since its beginning, so it’s been fun to bring my favorite characters to action figure form,” says Arana. The first wave of figures includes Senku Ishigami, Gen Asagiri, Kohaku, and Chrome. Pre-orders will open in March through bossfightshop.com as well as through your favorite retailers and e-retailers worldwide. “We have so many fun plans for this line, including some great surprises coming soon!” added Arana.

Boss Fight Studio (BFS) is a creator-owned company focused on high-quality, collectible toys. BFS products are known for having multiple articulation points, which allow for innovative and creative poses. The H.A.C.K.S. line is also fully customizable, which empowers collectors to build their own characters using pieces from the range. For more information reach out to BFS at press@bossfightstudio.com or visit bossfightstudio.com.

A photo accompanying this announcement is available at https://www.globenewswire.com/NewsRoom/AttachmentNg/b719626f-f2a2-433c-ab41-3d5b72a1bff6